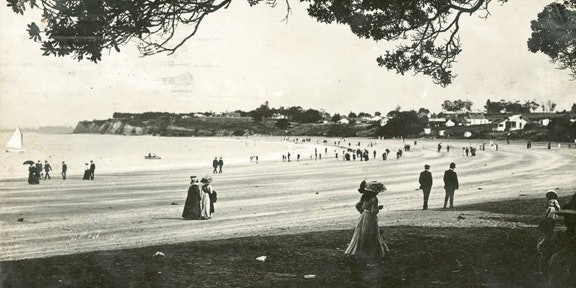 Nowhere in Takapuna is far from its beach, and most of the writers who have lived in the town chose homes within easy walking distance of the glorious sweep of sand which extends from The Strand to Hauraki Corner. Frank Sargeson’s house is the highlight of the tour and those wishing to view the interior can borrow the key from the Takapuna Library. Several other important authors have also resided in the area and are not within the area of the walk. Allen Curnow lived at 13 Herbert St overlooking Shoal Bay, an outlook which inspired several of his poems in the 1950s. Children’s author Tessa Duder began her writing career at 8 Fentham Rd, between 1971 and 1981. Novelist Maurice Gee occupied 20 Horarata Rd in1973. His children’s novel, Under the Mountain (1979), is set in Milford and on Rangitoto Island and In My Father’s Den (1972), contains scenes set at a Takapuna beachfront property.

Duration: The walk takes a minimum of 45 minutes.

Terrain: Over Takapuna Beach, gently sloping and level ground, and two busy roads at intersections. Most of the route moves through the lattice of quiet streets between Lake Rd and the beachfront. A short section of Burns Ave is the one section of the walk which is steep.

Parking: Available in some of the streets off Lake Rd, such as Hauraki Rd, Ewen St or Napier Ave.