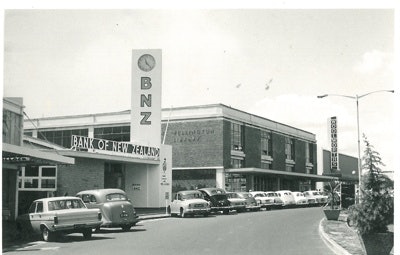 “Panmure, the crossroads of the Eastern Suburbs of Auckland; the town where people meet and shop, the jumping off spot from anywhere to anyplace,” wrote Mr S Rose, the Chairman of the Panmure Commercial Association in 1963.

Panmure was the embodiment of post-War optimism. Citizens hoped to live an egalitarian dream in acres of newly built social housing, and booming factories provided the income for lifestyles as comfortable as they wanted. Panmure's (serendipitously named) main street Queens Road became the Queen Street of the suburbs.

Panmure gleamed with modern buildings and hummed with activity. “The spectacular development of the town that 'came overnight' is unparalleled in the story of suburban shopping in this country,” added Mr Rose in 1963.

Panmure’s streetscape is still formed by the buildings of that era. This walk will take you to some of those buildings (and a bridge) and show you how the people of Panmure looked forward to a bright future through the way they lived, worked, shopped, travelled and did recreation and entertainment.

At each stop, you can also listen to eyewitness accounts taken from oral history recordings from the Auckland Libraries Heritage collections. These recordings were made in the 1980s and ‘90s on analogue tape, so some of the sound quality is scratchy, but do take the time to give them a listen. Warning: The recordings include the voices of people who have passed on.

In 2022 Panmure is a vibrant multicultural shopping centre. Bring your shopping bags because you may want to stop and explore some of the shops. Plan your walk around lunch at one of the many good ethnic restaurants.

This walk was researched and produced by André Taber, commissioned by the Urban Walking Festival with support from Eke Panuku Development Auckland and Auckland Transport. urbanwalking.nz