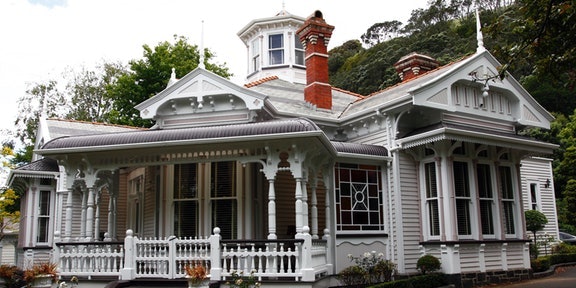 Residential development came to Mt Eden in 1864. George Owen subdivided his land forming 70 small sections around Percy Street and Hillside Crescent (previously known as Cromwell and Milton Roads). However it wasn’t until 1882 that the last of these sections was sold by auctioneer Samuel Cochrane. It was here that some of Auckland’s businessmen erected their country residences. The 1870s saw further subdivisions. Valley Road and Sherbourne Road were formed when Charles Tothill subdivided his land into two and four acre lots. James Stokes subdivided land adjacent to Stokes Road which was dedicated in 1873. William Rowe subdivided the area around View and Esplanade Roads in 1874. Other landowners in the area north of Valley Road followed suit while the land to the south retained its agricultural identity.

Mt Eden itself was increasingly popular for walking and as a weekend and holiday picnic destination. In 1874 it was proposed to form a public recreation reserve on Mt Eden. This was achieved in 1879 when 26 hectares were set aside as a public domain. The domain board placed restrictions on quarrying, fenced the domain and commenced tree planting, sowing grass and forming paths and roadways.

Volcanic stone was used extensively for early road building, as well as walls and fences and remains an important characteristic of the area. Allotment sizes demonstrate a pattern of more substantial suburban development and the area retains its early housing stock to a significant degree, including largely one and two storied timber villas. The architectural design of the villa together with surrounding gardens form a lasting expression of the Victorian and Edwardian middle class in New Zealand, reflecting a love of home and comfort, spacious interiors, decoration and display. The construction of this type of housing coincided with massive increases in population and with developments in the timber industry. Woodworking machinery was introduced in the 1860s, and in the late 19th century thousands of houses were built incorporating a vast range of mass-produced elements available from a highly mechanized timber industry.