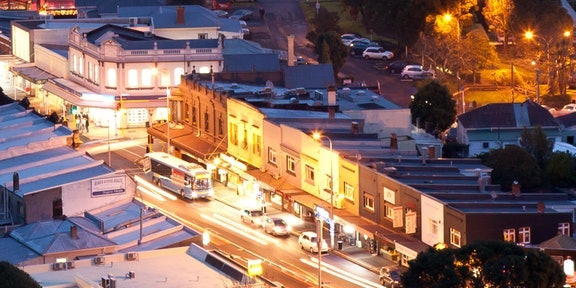 Mt Eden Road provided an early connection between Mt Eden and the city. It was one of the few roads surveyed in 1842 when the area was divided into small farms, which were offered for sale. An early development was William Mason’s wind driven flourmill near Windmill Road but it would be several years before other local amenities were established. During the 1870s the character of Mt Eden was changing with the subdivision of several farm properties into residential sites. The Crown grant for land between Stokes Road and Batger Road was secured by Montefiore in 1844. This area was subdivided by accountant and businessman John Batger in 1884, when Oaklands Road was formed.

The nucleus of the Mt Eden Village shopping area was the store established by Alfred Cucksey in 1873. By the late 1870s it had been joined by a school and a church. Horse drawn buses were the first form of regular public transport in Mt Eden. In 1881 a long awaited railway connecting Newmarket with Helensville was opened. Trains stopped at Mt Eden, Kingsland, Morningside and Mt Albert. By 1908 tramlines had been laid part way down Mt Eden Road, and were extended in the 1920s. The tram service stimulated both residential and retail development. The cluster of shops extended both north and south from the Stokes Road corner. Local entertainment was catered for from the late 1920s with the establishment of the Crystal Place Theatre.

The Mt Eden Business Association was formed in 1936, and twelve of the businesses included in the original constitution are still present in the village. Mt Eden Village is strongly defined by its relationship to the mountain, by changes in the road alignment that limit the commercial core, and by the close integration of residential development and churches with the shopping precinct.